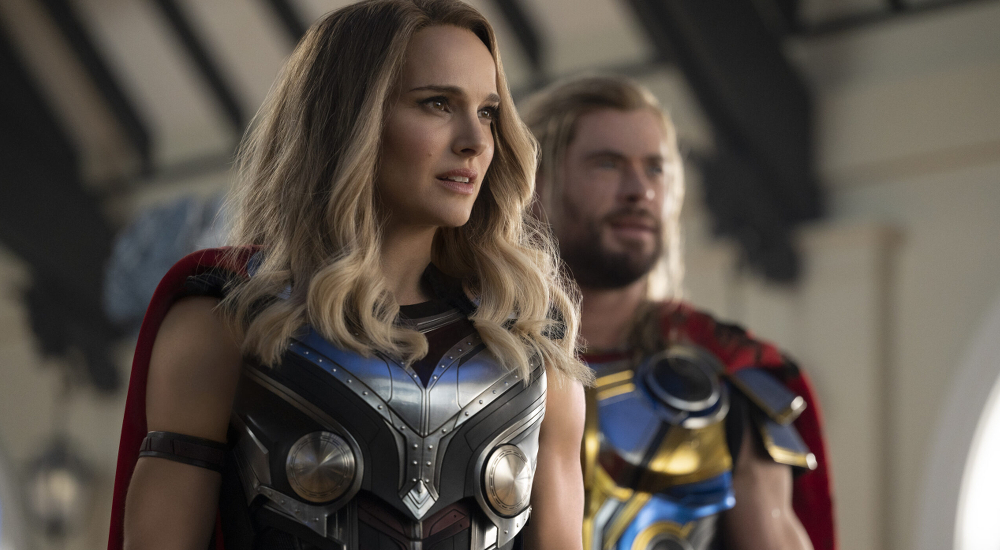 Thor: Ragnarok rescued an iconic character who had been ill-served by his two solo movies. Taika Waititi's first foray into big-budget filmmaking was a fantastically entertaining and colorful film that turned the blond god into a hilarious himbo. It also earned more than both of its dour predecessors. So a sequel with the same team was a no-brainer. But this intergalactic outing can't help but feel like a bit of a retread.

In the years since Avengers: Endgame, Thor has teamed up with the Guardians of the Galaxy, basically serving as space-age A-Team. (Now there's an idea for a TV show!) But this doesn't last long, as Odinson is summoned back to New Asgard after Gorr (Christian Bale) kidnaps all the village's children. He reunites with Valkyrie (Tessa Thompson) but is shocked to learn his ex Jane (Natalie Portman) has returned too, swinging Mjolnir. Dubbing herself "the Mighty Thor," she wields the hammer thanks to some barely explained science/magic. Thankfully, the movie doesn't bog itself down with real-world logic. Waititi understands this is a movie where people travel by a rainbow bridge to other planets. Spending time on stuff like this would only bog it down.

Running under two hours, the movie has plenty of laughs. But this time, some of them seem forced. For example, Thor parodies a Volvo ad from almost a decade ago. And screaming goats have been used as punchlines in videos for years. Here, those gags have an air of desperation. The comedy is much more natural in the film's centerpiece, where Thor's army attempts to recruit gods from other worlds. Russell Crowe plays Zeus, clearly having a ball. With a hilariously bad Greek accent, ridiculous hairpiece and dismissive demeanor, it's the highlight of the film.

But attempts at pathos are less successful. Revealing more would spoil the plot, but suffice it to say I was unmoved by the ending (and a brief post-credits sequence). What Waititi is going for has to be earned, and frankly he doesn't. Instead, Thor: Love and Thunder is more of the same for Phase Four of the MCU: Entertaining but disposable.