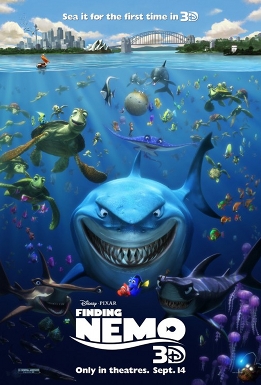 Presented in eye-popping 3-D, this re-release of Finding Nemo can now re-open the debate: What's the greatest Pixar
movie of all time? I thought Up had
settled it. Now I'm not so sure.

Easily Pixar's most colorful and joyous movie, Finding Nemo is probably even better than you remember.  Though not as emotionally devastating as
some of Pixar's more recent work, Finding
Nemo still takes you through lots of emotionally tricky territory. Even I
was not immune to its sad passages and heart-tugging moments.

If you are somehow unfamiliar with the story"”and many of the kids at
the screening were too young to have seen it the first go-round"”it follows
Marlin (Albert Brooks), a clownfish, as he searches for his only son Nemo
(Alexander Gould), teaming up with an ADD-addled blue tang named Dory (Ellen
DeGeneres) to escape the dangers of the open sea en route to Sydney,
Australia.

Brooks still stands as a perfect casting choice for the cautious,
cantankerous Marlin. Unlike later movies about smothering parents, his protectiveness
never seems like a trope but real emotion. Likewise, a pre-talk show Ellen
DeGeneres couldn't be any better as the big-hearted but empty-headed Dory. Together,
these two give the best voice-over performances Pixar has ever delivered.

As much as I appreciate the nuances I didn't catch when I first saw it
in 2003, Nemo is also hilarious. I
was frequently cracking up during scenes like the Fish Eaters Anonymous meeting,
escaping the possessive seagulls or any time the action moved to the dentist's
office.

Many will argue that it doesn't need to be in 3-D, because most movies
don't. But I'd disagree. Finding Nemo
is the Pixar movie that would benefit the most from 3-D, rendering its vibrant
colors and images of underwater life even more alive. The sequence where Dory
and Marlin escape the jaws of an anglerfish"”the one with the light on its
head"”is particularly impressive.

Now, just as "La Luna," the short that preceded Brave, bumped up that movie's overall score, I have to knock a
point for the Toy Story short "Partysaurus Rex" before Nemo. It's just not on par with what Pixar's been doing lately and
certainly a downgrade from the last Toy
Story Toon "Small Fry." But that's just a minor quibble. Seeing this movie
in 3-D is a sight to behold. Or, to paraphrase the sea turtle Crush: "It's
righteous, dude."