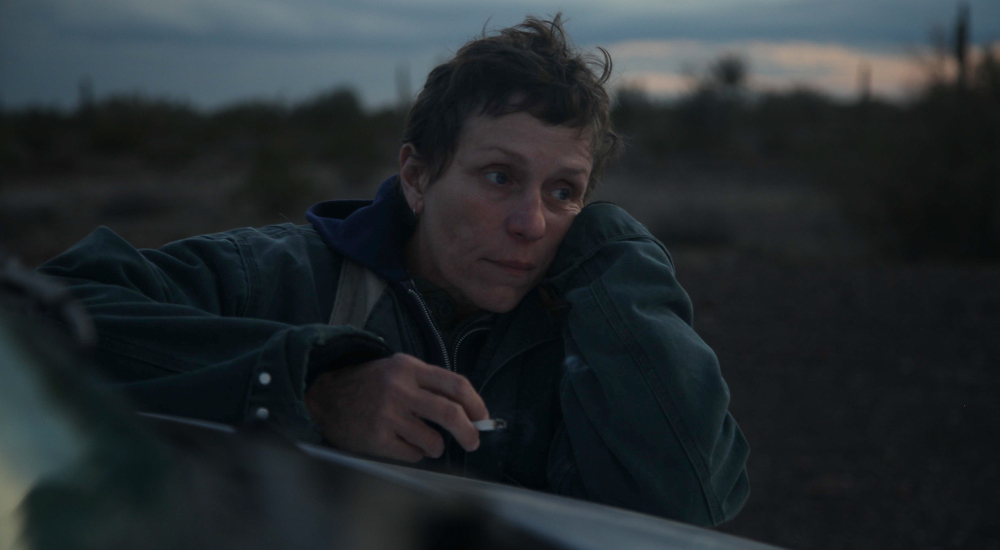 Blending the raw beauty of nature with the heart and soul of its people, Chloé Zhao's Nomadland unveils the story of a woman who embarks on a courageous voyage through the American West.

Set in 2011, Frances McDormand stars as Fern, an aging woman who lost everything when the US Gypsum plant she worked at with her husband, who recently passed, shut down. That planet was the life of the Empire, Nevada community. Finding work afterward isn't hard; it's damn near impossible.

Though never fully delved into, both the Great Recession and Fern's age play an enormous role in Zhao's character-driven narrative. Comfortably established in her hometown, Fern doesn't wish to start over. She had a home with a backyard fully exposed to the open desert with a full view of the distant mountain range. Letting go of everything she and her husband worked for won't come easy, harshly personifying the realities that many faces during the drastic time of struggle and change.

After selling off most of her possessions, Fern purchases a van to live in as she travels the country searching for work. Initially able to land a seasonal job at an Amazon fulfillment center, the harsh cold settles in as the lack of opportunities becomes apparent. An invitation to a desert rendezvous in Arizona sees Fern relocate to warmer temperatures, meeting fellow nomads where she thrusts herself into the community and begins to learn how to be self-sufficient with basic survival skills for the road.

It is these moments, surrounded by her peers, that Fern is most relatable. The dialogue, organic and purposeful, shine a light on the personalities that comprise this small group of people. A long, single-shot sees Fern walk amongst her peers, showcasing a wide array of living arrangements that bring notice to the fact that no two nomads are the same. Their mindset is what bonds them; their experiences are their driving force.

Beautifully captured in its raw, authentic state, Fern's time in Arizona is inspirational and character-changing. McDormand embodies a woman relearning how to live. Her van is a work in progress, her mind not too far ahead. Being a nomad wasn't a conscious decision for her but rather a means to survive. Rich in color and context, McDormand's work creates a character you care for, yearning for her success and happiness.

Picturesque landscapes surround her, giving life to the area and adding a layer of beauty to the land's vibrant, dramatic personality. Real-life nomads star alongside the two-time Oscar-winner, holding their own as they bring a sense of raw authenticity to the film, further cementing its natural, organic feel.

Small moments fill the film, each carrying a lasting impression, often in the form of a monologue. Swankie, a true nomad, delivers a heartfelt and profound exchange after revealing her cancer diagnosis. Unwilling to waste away in a hospital bed, she longs for memories on the road. Her perspective is one we all live in our minds, but her immediate execution brings a sense of knowledge of the nomad community, deepening the film's genuine approach and community attitude.

*This film is available in theaters and on Hulu.