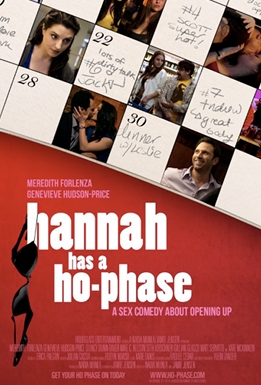 Hannah Has a Ho-Phase is an unholy mash-up of two of the vilest romantic comedies ever made, The Ugly Truth and I Hate Valentine's Day. It's cynical, ugly, and woefully unfunny. It also feels like a rip-off of HBO's Girls, not the least of which because its protagonist is named Hannah.

Meredith Forlenza plays Hannah, the more prudish roommate of amorous pole-instructor Leslie (Genevieve Hudson-Price). Both are a little sick of each other, so they make what has to be the dumbest, most pointless bet in the history of entertainment. Hannah has to sleep with ten guys in six weeks while Leslie has to be abstinent for the same amount of time. Why ten? Why not six? Why not twenty? By this movie's logic, the only way to explore your sexuality is to sleep with lots of people in a short amount of time.

That's pretty much the whole movie. It's impossible to care about any of these characters in the slightest because they're all incredibly one-dimensional. And I'm really sick of indie movies that want to explore some ugly facet of American culture, but instead of using subtlety or good writing, they literally have a character ask the question out loud to someone. In this case, it's "Why is it OK for a man to sleep around but if a woman does it, she's a slut?" It's a valid question, and there's some way to explore that without sounding like a Jezebel article, but this movie is wrong-headed about everything.

What does this sex binge even teach Hannah? Nothing, because she's just gonna fall for her douchey work partner anyway. They work at a marketing firm trying to come up with a "sexy" way to sell a rapper's new line of vodka. It would be impossible for any of this to matter less. The worst mistake the film makes in its workplace setting is having Saturday Night Live star Kate McKinnon play Hannah's cubicle mate and then doesn't give her a single funny thing to do.

If this movie had any brains whatsoever, it might have explored how anonymous hook-ups can lead to increased loneliness, but hey, let's not dampen the mood. This is a New York City romantic comedy, so let's not do anything interesting, including easy jokes about hipsters and fanatical Christians.

We're not even halfway through the year, but I doubt I will despise a movie more than the laughless, charmless, brainless Hannah Has a Ho-Phase.