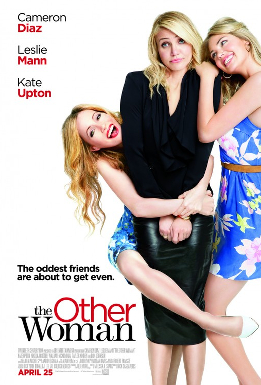 I'll admit my expectations were set pretty low before The Other Woman began. After all, the plot of women finding out that their man is cheating on them, becoming friends and getting revenge isn't exactly groundbreaking. In fact, at face value, this film could just be called John Tucker Must Die: They're at it Again But Older!

Cameron Diaz headlines as Carly, the uptight lawyer (surprise) too busy to fall in love until she meets Mark King, the seemingly perfect man. That is, until she goes to surprise Mark at home and runs into Kate, the unassuming, goofy wife played by Leslie Mann. While I appreciate any movie that has women teaming up against a cheater instead of fighting each other, it's hard to get past the deeply embedded stereotypes these women play. Kate is clueless and clingy while Carly is a big proponent of tough love. Kate is the Stepford wife out in suburbia while Carly is the sexy big city dweller. The trifecta is complete with the addition of second mistress Amber, played by Kate Upton. Amber is the stereotypical young and dumb one. She can't even figure out how to use binoculars"”how hilarious!

Their plan for revenge goes through the standard gamut of pranks played on "masculine" men: estrogen in his morning shake, hair removal cream in his shampoo, and laxatives in his whiskey. What's funnier than a manly man faced with enlarged nipples, mood swings and poop in his pants?! While the ladies get revenge, they become best friends along the way. Except, do best friends only bond over their mistreatment? The Other Woman would have you believe that women only talk about men. Needless to say, this movie does not pass the Bechdel Test, even when the cast is primarily female.

The only bright spots in this movie are Cameron Diaz and Leslie Mann. Both have proven themselves to be solid comedic actresses, so both shine when they can. They are unafraid to go all the way in committing to a bit, particularly when it comes to the physical comedy, which is by far the most enjoyable part of this movie. The other actors in the film, including Upton, Coster-Waldau and Nicki Minaj did their best, I guess. I love Coster-Waldau as Jaime Lannister on Game of Thrones, but he was utterly unimpressive here. Though to be fair, that's saying more on the script than on his abilities. Don't even get me started on how we're supposed to believe Leslie Mann and Taylor Kinney are related.

Actresses like Diaz and Mann deserve better than this movie, which ends up being thoroughly predictable and only rarely funny. I can only continue to hope that in the future, studios figure out that women can be funny, attractive and multi-dimensional.