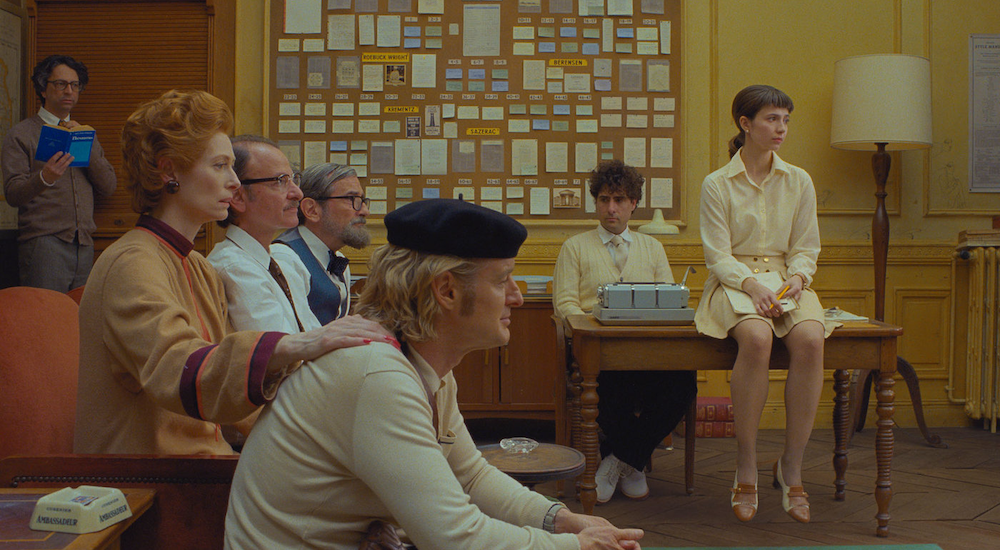 Wes Anderson has been making films for 25 years now. And as his career progresses, his style has narrowed into the symmetrical, muted color palette that has become instantly recognizable. The French Dispatch is exactly what you’d expect from a 2021 Wes Anderson film and while it’s got all his usual charm and quirkiness, it’s also just…a little boring.

The French Dispatch is the name of an American newspaper based in a fictional twentieth-century French city. The film reads like the visual version of the paper, split into sections and articles from different journalists. Anderson’s cast of regulars are all here — Tilda Swinton, Adrien Brody, Frances McDormand, Bill Murray, and Owen Wilson along with some newcomers to the Anderson-universe like Timothee Chalamet and Jeffrey Wright.

In a real world that’s dealing with political turmoil, a pandemic, and a climate crisis, the journalists of The French Dispatch feel like they’re from an alternate universe. In the fictional town of Ennui-sur-Blase, the biggest stories are charming small-town adventures, which is exactly the point. The world of The French Dispatch is a small geographic dot telling neighborly stories, not so subtly a nod to similar stories told by The New Yorker.

Due to covering multiple stories, the cast is vast and sprawling. All of his movie regulars are here doing their schtick, rattling off witty, dry dialogue at a rapid pace. Bill Murray presides over all as the irascible editor. Tilda Swinton is an oddball art historian. The standout performance has to go to Anderson-verse newcomer Jeffrey Wright as Roebuck Wright, a thoughtful journalist with a photographic memory who recounts a touching story. Just as the cast is utterly predictable, so is the trademark Wes Anderson style. If you’re already an Anderson fan, it’s almost comforting to slip back into his impeccably arranged frames, a joy to see what he puts together moment to moment. You can always catch little moments from characters in the background or find more visual Easter eggs the more you watch. He has made it his immediately-recognizable calling card.

His films can feel like putting on a cozy sweater or hoodie after the first cold front. Comforting, familiar, and charming. You know what to expect from The French Dispatch and it delivers exactly that and no more. However, that familiarity can also be boring. Why rush to the movie theater to catch it on the big screen when you already know what to expect? In some ways, with the same cast and visual style, Wes Anderson films can feel like the indie version of Marvel movies. That predictability will always bring in the fans, but how many times can you watch slight variations of the same film? Hopefully Wes Anderson doesn’t stay locked into this one group of actors and one specific style. The French Dispatch isn’t going to stand out as one of his best but rather fade into his larger group of work. Here’s hoping he can retain the charm but revive the heart of his future films.