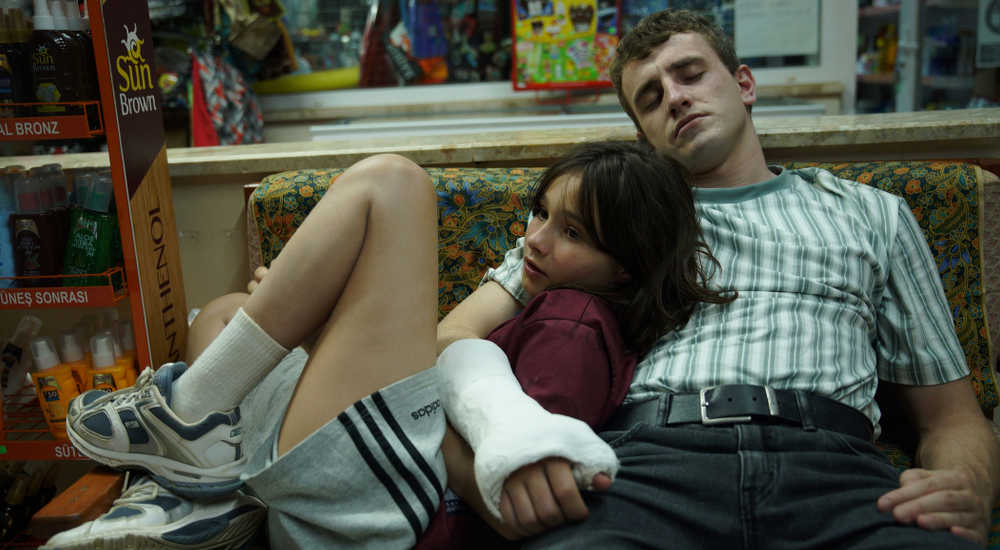 Childhood memories often feel captured in small flashes. It’s less distinct details and more of how you were feeling in the moment. Charlotte Wells’ Aftersun poignantly captures one such flash of a young girl on vacation with her father and leaves enough ambiguity to make the audience fill in the past and future.

Sophie (Frankie Corio) is eleven years old and on a summer vacation with her young, father, Calum (Paul Mescal), in Turkey. Interspersed throughout are camcorder clips of their vacation filmed by her dad, a clear hobby of his. As we watch this father-daughter duo and their dynamic through Sophie’s eyes, they both seem to be stuck in between. Sophie feels too old to play with other kids but too young to hang with the teenagers. Calum seems torn between being the man Sophie thinks he is and the plagued, imperfect man he really is.

Wells trusts the audience to take its own meanings from scenes that can feel unrelated. Besides the camcorder footage, there are flash forwards to what appears to be a club with strobe lights, and other glimpses of who we can assume must be an older Sophie. It all starts to come together in the final act, leaving you to draw your own conclusions about what may have happened to Sophie since this vacation.

Frankie Corio does a stellar job as Sophie, mixing the self-involvement of a preteen with a kid that simply adores her quiet father. Paul Mescal also excels as Calum, bringing that quiet melancholy he had in Normal People to this film as well.

The downside to the interspersed cuts and ambiguity is that the film can be confusing. Perhaps it leans too heavily on assuming we understand its metaphors. This is a film where not much happens, and its 1 hour 42 minutes runtime can make all that nothing feel even longer. The lack of clear context also lends a coldness, a distance between the film and the audience. It’s clear Calum doesn’t want Sophie to pick up on any of his issues and since the film is from Sophie’s point of view, the audience inherits this distance. While it’s an effective style to illustrate the inherent tension between father and daughter, it also makes it that much harder for the audience to connect with Calum. Thankfully Mescal plays him with an endearing sadness that helps bridge the gap.

Aftersun is a strong directorial debut from Charlotte Wells and gives Paul Mescal an excellent vehicle to continue to exhibit his acting chops. It’s a tender story about how, as children, we can struggle to see our parents as fully-fledged people with all of their complexities. Its light touch to storytelling can feel confusing and stoic and its long runtime doesn’t help matters. Still, there’s no doubt it’s a unique little time capsule and worth a look.